Imagine a place where knowledge meets technology to create something new and exciting.

Similar to opportunities like our annual film competition, Mosaic Mobile, these opportunities for students expose them to new ways of expressing themselves, learning new forms of digital media, and gaining critical thinking, collaborative and creative skills necessary for career preparedness.

During the event, one of our education leads, Randy Strobl, helped students (as well as parents and teachers) recognize their abilities and discover the potential of smart devices, coupled with their imaginations.

“Many of the stations focused on coding, and we represented a new video component of digital media,” Randy said.

Our station included four iPads with four different free apps for the students to learn and use. The special effects app showed students how to make it look like the ceiling was falling on them or how to turn what they envision in their minds into a real visual sequence.

“We even took volunteers to act out scenes, while students recorded them and applied the effects on the iPad,” Randy said.

GarageBand showed the students how to turn their smartphone or tablet into their own personal recording studio. With this free app, anyone can make original music wherever and whenever.

“We chose these apps because they’re free, accessible, and user-friendly,” said Randy. “We brought their attention to the technology, but the kids are the ones who took it to the next level through their own skills and ideas.” 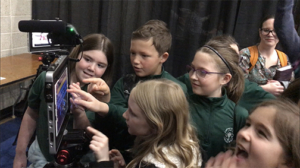 ese apps on the tablets, the students discovered ways to bring their ideas to life. In the short amount of time spent at the station, we witnessed the impact of this education on the students. They created animations and short songs within minutes of picking up the tablet. Some students even returned later to finish their creations.

“We showed teachers how laptops could be used as tools for creativity and incorporated into modern math, science and language arts curriculum,” Randy said.

Computer Science First provided us with an opportunity to do what we do best: educate youth about accessible forms of creative platforms, while instilling confidence to trust their instincts, collaborate with others, and develop important skills for the future.

Inspiring Innovation Mosaic at the Museum