We kicked off summer with a week-long mobile filmmaking camp at the Grand Rapids Public Museum. With the Changing America exhibit as a backdrop, students ranging from seventh to tenth grade learned mobile filmmaking skills while exploring social and civil rights issues. 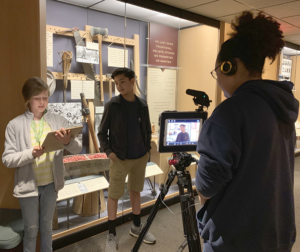 Our education leads Mallory Patterson and Randy Strobl taught students a variety of mobile filmmaking skills using smartphones and tablets. Each day began with a lesson on a different step in the filmmaking process, including interviewing skills, media literacy, storyboarding, lighting, audio, and production. After the initial instruction, students worked in small groups and put the lessons to actions, to bring our community’s voice to the Changing America exhibit.

“The Changing America exhibit taught the students the power of storytelling through various forms – including music and movies,” Mallory said. “We discussed how the videos of speeches tied to liberation, the breakdown of stereotypes, and how these themes still exist in the world today.”

Throughout the camp, students were encouraged to draw connections between their interests and the different forms of media available to them. Mallory and Randy guided the students to understand the components that make up a good story.

“We wanted them to be able to convey not just what happened in their life, but how it felt,” Mallory said. 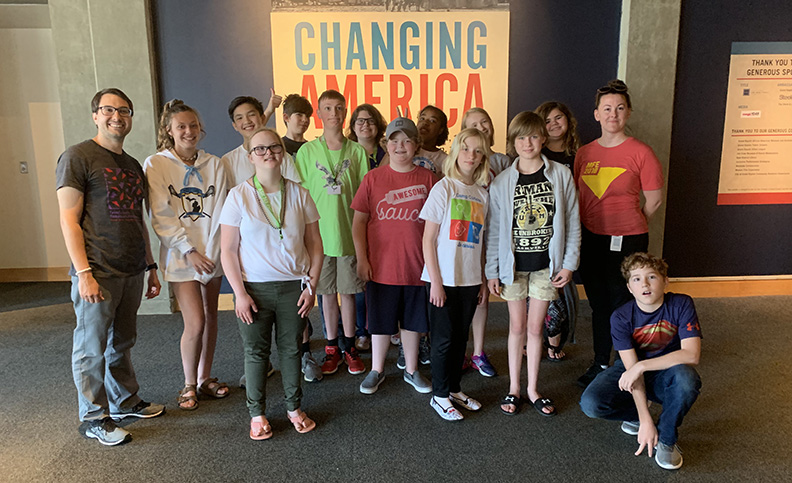 They started with the early stages of the filmmaking process. Students brainstormed ideas of stories from their own lives they wanted to tell and how to share them. Some students wrote down their thoughts in a list of bullet points, outlining the beginning, middle, and end scenes of their story. Other students created visual storyboards, realizing varying levels of skills in drawing.

“Part of our mission is to help young people turn their passions into tangible skills for creation and future careers,” Mallory said.

The Grand Rapids Public Museum became a playground to explore different lighting, how it appears on camera, and how different spaces create different audio levels on video recordings. Using real equipment and editing software, the students conducted interviews with each other, which allowed them to experience speaking in front of the camera and managing the recording process behind it.

At the end of each day, Mallory and Randy debriefed with the students about some of the challenges and successes of each project. Initially, the students learned how to collaborate with people they just met, deal with distractions in a stimulating environment, and adapt at the moment when an interview strays from the pre-planned questions or goes off-topic.

“It was amazing to see their growth in the film making process in just one week,” Randy said. 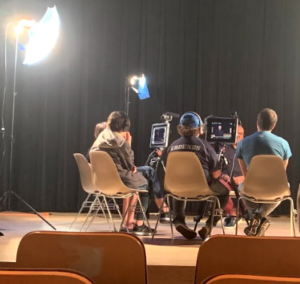 Through our partnership with the Grand Rapids Public Museum, students used the theme of belonging to interview community members. Each person spoke about the social fabric of Grand Rapids from the civil rights movement to the present day. The student’s audio interviews will become a part of the Changing America exhibit. Later this summer, the Mosaic team will use the interview content to create a short film that the museum will screen.

In addition to the mobile filmmaking workshops, students went on two field trips throughout the week. The first was to WGVU Public Media and the second was to the Grand Rapids African American Museum and Archives. Both excursions provided the opportunity for the students to see different forms of storytelling through media and artifacts. The students interacted with professionals in creative fields and realized the potential for their passions to translate into real-world skills and careers.

Through community projects like this one, we bring expertise and resources to communities and schools that don’t have extravagant equipment or the latest digital software. Focusing on using smart devices, like phones and tablets, to make movies, edit videos, and tell stories levels the content creation “playing field.” 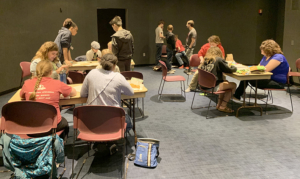 “One student came to camp with a love for science fiction and even wrote her own stories,” Randy said. “We showed her a scriptwriting app, and after minimal instruction, she had it figured out and lit up with excitement to see her ideas become real.”

Another student lives an hour away from Grand Rapids, and their parent drove them in every day for this experience.

When parents came to pick up their children, they marveled at the work accomplished in just a few days. Several parents expressed joy in seeing their children open up like never before and were eager to have their child use what they learned from camp on their own devices at home.

“This camp is a good example of bringing together diverse students from different schools and backgrounds and watching them work together to solve problems and produce good work,” Randy said.

Spending a week with these students gave them opportunities to explore their passions and take away relevant skills and applications to use in their own lives. Our goal is to continue sharing our knowledge of technology and storytelling with youth and inspire a new generation of empowered voices.