In our world of creativity and community, we feel inspired by stories of young artists discovering their passions and spreading their wings into new realms of creative possibilities. This summer, two incredibly talented and creative artists, with roots in Grand Rapids, took the leap and headed to New York City, to pursue their passions.

Out of over 8,000 applicants, Spotify hired 79 people, ranging across all ages, including Brooks.

“I had a lot of fun writing my cover letter, and they asked me for two writing samples. From then on, they asked if I’d be interested in UX writing and I told them I’m interested in Spotify in general,” Brooks said. 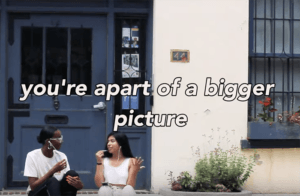 Brooks’ internship focused on Spotify’s user experience and understanding how designs and works go together. It proved to be the perfect combination of her passions for communications and design. According to her, Spotify prides themselves in hiring the right people, not just the best people.

“I go to meetings and design product reviews with incredibly talented designers with people from Facebook, Google, Twitter, and Vine,” Brooks said. “It’s so inspiring. Like, wow, am I really in this room right now?”

An aspiring filmmaker and photographer, Mariah Barrera took NYU course work focusing on storytelling and how to portray narratives visually, without relying on sound. Her classes and projects help build a foundation of understanding for how to tell compelling stories without audio.

Coming from Grand Rapids to New York City, Mariah felt inspiration from living in such a dynamic city.

“The change of geography and being here with so many people pursuing creating things is inspiring. Walking home at night after class and seeing the Empire State building really makes you feel like you’re a part of a bigger picture.”

Previous to studying at NYU, Mariah discusses the moment she realized her desire to become a filmmaker during the WMCAT summer program.

“I always knew I wanted to do something creative, and for a long time, that was photography. I still am a photographer, but being on that set, from the planning to the execution and seeing the final product I realized I was capable of directing something like that,” Mariah said. “I feel lucky to figure out my passion at a young age.”

Brooks and Mariah marvel at their own growth through their New York City experiences, learning more about themselves and their goals.

“I feel like I’ve learned so much about being able to trust the process and trust that what’s for me is for me,” Brooks said.

Mariah often asks herself if she would still produce art even if no one else saw it.

Continuing her creative ventures beyond NYU, Mariah is currently working with us on a project for the Grand Rapids Art Museum, in collaboration with Grand Rapids Opera.